The pounding of Sookie’s heart is so loud that it roars in her ears. After dinner she had sent everyone away. She did not want her conversation with Eric to be spied on; this is a private matter between the two of them. There has already been enough outside influence on their relationship. She knows she has nothing to fear from Eric; she had lost sight of that for a bit, but she found her way back.

Hurrying through her shower, Sookie dresses in a black and white maxi dress with large flowers at the hem. She leaves her hair down, applies only lip gloss and perfume, and walks with purpose out of her room. Her last glance at the hourglass shows only a small amount of sand left in the upper part; FINALLY!

She walks to where she can feel Eric’s void. She should have guessed the black and white bedroom belonged to him. 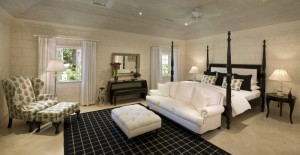 Eric’s room; yes, it is light-tight.

She pauses outside of his door; she does not want to ambush him as soon as he opens the door, but she does want him to know she is looking for him. Heading for the outdoor seating area, she walks slowly through the house, heading for the outdoor seating area. She leans against the railing, watching the last of the sun’s rays sink beneath the horizon. The staccato of her heartbeat picks up once the sun is gone from the Caribbean sky. It won’t be much longer…

Two little words; four total syllables, but they are enough to cause her heart to skip a beat. She was leaning against the railing, staring at the sea, but now she turns to face Eric. Her breath catches as she takes in the sight of him. Her memories did not do him justice; he is magnificent. Standing in the doorway, his body is illuminated by the soft lighting on the patio. He is wearing tailored linen pants, a tight white wifebeater, and an unbuttoned white shirt. The outfit emphasizes the perfection of his physique. His hair is styled back, enhancing the beauty of his face. His eyes are unreadable from this distance, but his lips are slightly parted. Her eyes caress every part of his body; it has been too long and she had been a fool.

The silence stretches between the two of them, and Eric begins to worry. His eyes feast on the presence of Sookie in front of him. Although he has perfect recall, it is like he is seeing her for the first time. Her skin is rich golden brown; her hair is lighter from the sun, almost white. Her body looks smaller, but it makes her curves look rounder. Eric longs to take Sookie in his arms, but he stays where he is. Her heartbeat is still erratic and her breathing is in short pants. He is worried she is having a panic attack and is about to call for someone to help, but her voice drifts across the distance.

Sookie whispers, “Hey Cowboy.” Eric’s eyes snap to her face; she is teasing him! Her lips are curved in a teasing grin, and a blush spreads across her skin. Eric is already hard for her, but the scent of her arousal makes his fangs ache. His eyes widen slowly as she walks towards him. Stopping in front of him, she wraps her arms around his waist, resting her body against his. She purrs as she rubs her face against his chest, “I missed you Eric.”

Eric wraps his arms tightly around Sookie. He needed her to make the first move; it was irrational, but a part of him felt rejected when Sookie left for Barbados without him. That rejection intensified the longer Sookie maintained her silence. Every day they were separated, he cursed the fates, destiny, whatever you wanted to call it. How could he find his mate after all this time just to lose her in that way?

Eric brings one hand up to caress her face. “There is nothing to forgive. You needed to heal.” Eric leans down to place a chaste kiss on her lips. He pulls back quickly before either one of them are tempted to take things further.

Sookie sighs and steps out of Eric’s embrace. Eric drops his arms, but Sookie grabs one of his hands. She pulls him towards the couches so they can sit down. The initial joy Sookie felt in their reunion is beginning to fade as she realizes they need to talk. They can’t put it off any longer. If they are to move forward, they need to put the past behind them. Eric sits on the couch with his hands on his knees. Sookie sits beside him with her legs underneath her, her hands twisting in her lap.

Eric reaches over to still Sookie’s hands with his own. “Sookie, we do not have to talk about anything you do not want to talk about.”

Sookie sighs with resignation. “Yes, we do Eric. We need to talk about what happened to me. You need to know why I ran from you.” As clinically as possible, Sookie describes what she remembers of her time with Neave and Lochlan. She begins with the attack at the farmhouse and ends with her panic attack in Russell’s mansion in Jackson.

Eric’s body is rigid with his fury. Hearing the physical and mental abuse Sookie went through in a short period, boggles the mind. To inflict that much anguish on another creature usually took an extended period because it required a complete reconditioning of the mind. Sookie had only been gone hours.

“I felt your pain,” Eric says haltingly. He glances at Sookie and sees her eyes fill with tears. She had remained unemotional, but now her calm façade crumbles. “No, Sookie; no more tears.” He brushes the tears from her face.

Eric shifts uncomfortably on the couch. He knew this conversation was coming. Pam had hurled every insult she could think of in every language she knew at him when he had told her the full story of Sookie’s abduction, rescue, and eventual departure. Pam exemplified what it meant to be a vampire, but she was still a woman first and foremost. She berated him for being a fool, giving in to his bloodlust and desire for revenge instead of seeing to Sookie’s well-being.

“I have no excuse,” Eric says slowly. He lowers his head in shame, but continues speaking. “I had felt your pain from the instant I woke for the evening. It was crippling, all-consuming; at one point, I could not feel you anymore and I feared the worst. I was overcome with bloodlust; I wanted to destroy every single one of your tormentors. Several times Godric used the maker’s command to control me, and even then, I was uncontrollable. Godric and I interrogated Debbie Pelt; she led us to Lorena. When we were outside, I doubled over in pain because of your emotions coming through the bond. I lost it; and then stormed into the house in a blind rage. The first thing I saw was Compton. I took off after him.” Eric raises his head to stare at Sookie. “I am so sorry I have failed you.” A blood tear slides down his cheek.

Sookie leans forward to wipe the tear from Eric’s face, and offers her finger to Eric. He licks the blood from her finger, but does nothing else. Sookie remains quiet. In all honesty, she had expected to hear something like that from Eric; Izaiah’s words had haunted her for days. Sookie, while ready to hear that answer, is still deeply hurt by it.

“You haven’t failed me Eric,” Sookie says carefully. “But you have hurt me.”

Sookie shakes her head sadly, a wry grin on her face. “It doesn’t work that way. You weren’t there for me when I needed you most. There isn’t some magical way to fix that, nothing you can buy to replace the hurt I feel.”

“Sookie, are you…does this mean…” Eric cannot finish his question. He feels crushed under a flood of despair. All of his hope at reuniting with Sookie flees.

“NO!” Sookie surges forward to grasp Eric’s face between her hands. “No. I know what you are thinking and you can stop it right now. I’m not leaving you Eric. We’ll just have to work through this together. As cliché as it sounds, we will take it one day at a time; we keep moving forward. If we dwell on Jackson, it will destroy us. I love you; I want to be with you. What do you want?”

“Everything,” Eric replies quickly. Seeing Sookie’s confusion to his response, he continues. “I want everything from you. I want eternity with you. I want it all.”

A wicked grin spreads across Sookie’s face as she recalls saying something similar to Eric before. She decides to tease him with his own words. “Greedy…I love it!” Her hands caress his face reverently, ghosting along his features with the lightest of touches. Touching him calms them both, a balm for their battered emotional state.

Eric’s signature smirk appears on his face as he too remembers the conversation. He leans forward to kiss her lips lightly. When he leans back, his smirk is still in place as well as that arrogantly raised eyebrow. “What’s not to love?” Sookie laughs, breaking the intensity that had fallen between them.

Sookie and Eric spend the next several hours talking; something they haven’t been given the opportunity to do much of since they met. They talk about random bits of their life; Eric tells stories of his adventures with Pam, Sookie tells stories about growing up with Godric and Isabel. The atmosphere between the two of them is relaxed; Sookie sits in between Eric’s legs with her back to his chest and his back is pressed against the arm of the couch. Her hands rest against his thighs, her thumbs rubbing back and forth across his skin. His arms are wrapped loosely around her with his fingers drawing random patterns against her stomach.

“I like this,” Sookie says out of the blue.

“What is that, min kärlek?” Eric nuzzles his face against Sookie’s hair, inhaling the lingering scent of the sun.

Eric hums in agreement. This is the first time in decades, perhaps centuries that he has been able to completely relax his guard. It is the first time that he can ever remember feeling completely at peace. However, he knows there are dark clouds on the horizon. They still need to deal with the trials of Compton and Lorena; something must be done about Sophie-Anne and her schemes; and Niall needs to pay for his betrayal. But for tonight, Eric is content to wrap his arms tighter around his mate and ignore the worries of the world.