Godric looks at the envelope on his desk. The seal on the envelope is one he had hoped to never see again. The seal indicates it is time to settle a debt that had hung over his head for centuries. Godric hoped that his debt had been forgotten. He knew better; a debt to one of those individual’s was never forgotten.

Wanting to get it over quickly, Godric grabs the letter opener from his desk and breaks the seal. He unfolds the letter, and reads the message. It is short, but then again, he did not expect a wealth of information.

Meet me in Bon Temps, Louisiana. You will know how to find me.

Godric sighs, a total unnecessary action, but one that seems to convey his level of frustration. He is the Sheriff of Area 9 in Texas; he has pressing business to attend to. He does not have the time to run to Louisiana on a foolish errand. Perhaps he can send Eric in his place.

Godric pushes away from his desk, instantly dismissing the errant thought. This is his debt to repay, not Eric’s. He will not use his child in such a way. Besides, he has not spoken to Eric in many years. He does not wish his first contact with his son to be a Maker’s command. There is no way to know what will be needed to fulfill this debt. Moving out of his office, Godric calls for his second.

“How can I be of service to you this evening, Sheriff?” Isabel Beaumont is a beautiful vampire of Spanish descent.  Isabel has been with him for decades. She had been turned during the Spanish Inquisition. Her husband had found Isabel in bed with her lover. In his rage, Isabel’s husband denounced her as a witch. She was sentenced to burn at the stake. Instead, her lover, who happened to be a vampire, stole her from the prison she was held in. He drained and turned her that night. They were with each other for nearly five hundred years. Isabel’s maker met his True Death during World War II. Eric and Godric had found Isabel in Germany while they were posing as SS Officers. Godric was able to arrange for her to leave Germany safely. After the war was over, Godric left Europe, taking a sheriff position in Texas. No matter how much time passed, nothing changed. Wars had been fought for centuries as monarchs tried to expand their empires, spread religions, or destroy other nationalities. Godric was tired of the constant fighting in Europe. He hoped America would be different. Once he settled in Dallas, Godric offered Isabel the position as his second. Her loyalty was unwavering, and Godric trusted her as if she were his own child.

“Isabel, I need to leave the area for a personal reason. You will be the acting Sheriff while I am gone. Everyone is to obey you as they would me. Any that do not follow this edict, I will deal with upon my return.” As they talked, they had made their way to his bedroom. Godric pulls clothes out of his chest then vamps to his closet to retrieve his satchel. As Godric packs, he hopes this debt will not take longer than a day or two.

“Where are you going?” Isabel leans against the door frame as she watches Godric pack his belongings.

Godric pauses to look at her. His eyes meet hers briefly before looking away. As he locks the satchel he replies, “I do not wish to tell you.”

Isabel’s face gives nothing away. Vampires do not show emotion, even though they feel emotions more strongly than any other creature in existence. To show emotion gives your adversary an edge. As Godric turns to walk towards his balcony, she whispers, “You do not trust me.”

Godric moves in front of Isabel, looking into her eyes. He touches his hand to her cheek, and kisses her forehead. It is a sign of affection, an action a father would show his daughter. He smiles at her slightly. “It is not that I do not trust you. I merely do not know how long I will be there, and I do not know if my journey will involve other destinations. I will keep you informed that I am safe so you have no need to worry while I am gone.”

Godric begins his descent to Bon Temps. He hovers over the woods, and inhales deeply. He catches the scent he is looking for and moves toward the outskirts of town. He passes over a bridge and lowers to the ground. The scent he is looking for is here, but it is not fresh. It is several hours old, and mixed with the scents of other enemies. Godric is puzzled; he has not smelled anything like this since he was in Ireland in the 1300s. Inhaling again, he picks up the scent he needs and speeds off the bridge. The trail ends at an old white farmhouse. 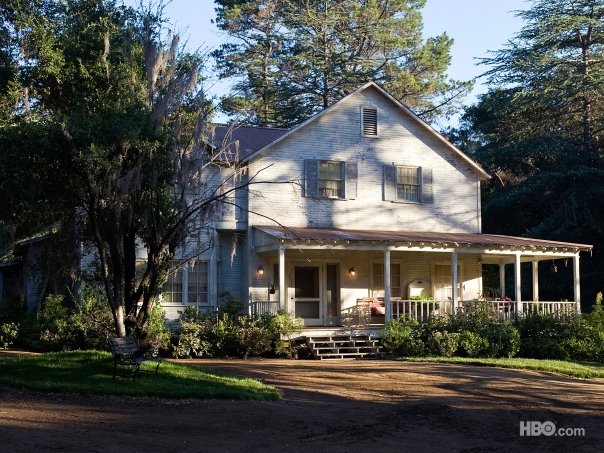 Godric takes in the scene before him using all of his senses. He detects three humans in the farmhouse, two of which are sleeping. One he hears weeping softly in the front of the house. He sniffs again, trying to find the source of the scent. Godric hears a twig snap, and crouches into a fighting stance. His fangs snap down, his hands curl into claws, and a growl rumbles in his chest. A lone figure moves out from behind the tree in the front yard. It is a middle-aged man, taller than Godric, slender, his brown hair styled back from his face. Godric takes in the expression on his face, and sees anguish. Godric immediately straightens; he knows this man means him no harm at the moment.